Oral Traditions of the Burnett Family 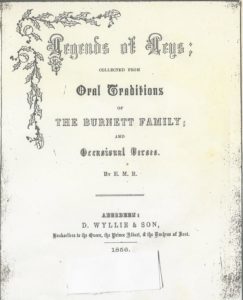 A new found Burnett friend in Aberdeen has reminded me of the interesting small book, Legends of Leys, compiled or written by E.M.R. and to which I drew attention in Banner 15. When he first arrived in Aberdeen, he came across the book quite by chance in the Reference Section of the Aberdeen Central Library. Naturally intrigued, he was dismayed to discover that he couldn’t borrow the book, and spent an hour or so photocopying the pages to peruse at his leisure. Sometime later, (maybe in the late 1980’s), he had cause to examine the book again and discovered it was missing. He had hoped that it had been re-shelved for safekeeping in the library “overflow”, but alas it was untraceable and he presumed stolen. Fortunately, there are reprints available and the content is available online.

Now he had always assumed E. M. R. to be of the “fairer” sex since it would be natural in 1856 for a woman to publish using initial. There then existed an Elizabeth Marjory Ramsay of Balmain who would have been 36 in 1856. Could this be the mystery scribe?

If any reader can provide any information as to who E.M.R is. or, if they are aware of the whereabouts of an original copy of the book, we would be very pleased to be contacted.

Whilst it is pleasing to know that the stories are preserved for future generations of Burnett’s, academics and other interested parties, consideration is being given as to how the subject might be expanded and may well be another feature of the Burnett Gathering in 2017. We have a number of ideas.

Charles Burnett had the good fortune to meet Fenton Wyness, a renowned architect and author who assisted with some restoration work in the Great Hall at Crathes. I also recall a visit from him but was too young at the time to appreciate whom I met.

Fenton Wyness was responsible for Legends of the North East which included a story about the Loch of Leys and from which Charles Burnett has provided me with the following.

Fenton Wyness, 1903 – 1974, was a well-known Aberdeen architect, antiquarian and author. He published fourteen books, illustrating several in his own unique style. In 1970 he published a small paperback book for young people entitled Legends of Northeast Scotland which had a distinctive cover featuring the coat of arms of Aberdeen County Council. The shield has four quarters symbolising the four main area of Aberdeenshire;

Buchan, Mar, the Garioch, and Gordon. The book contains twenty-four short stories, one of which concerns the Burnett family. 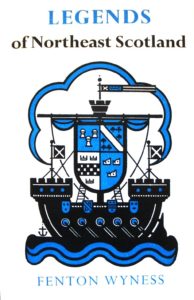 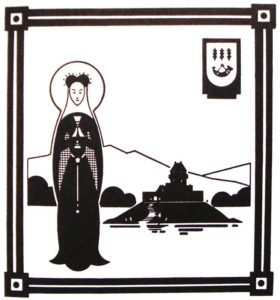 Illustration for ‘The Phantom of the Loch’

As a tribute to Fenton Wyness who was a personal friend of mine, here is the Burnett legend taken from his book with full acknowledgement to his memory.

THE PHANTOM OF THE LOCH

On a beautiful site on the north bank of the River Dee, not far from the village of Banchory, stands the ancient castle of Crathes. It is the ancestral home of the Burnetts of Leys, and is one of the most beautiful castles in Kincardineshire.

Crathes Castle was built towards the end of the sixteenth century, but prior to this the Burnetts stayed at their stronghold on the Loch of Leys, a short distance north-west of the present castle. The Loch of Leys has long since been drained, but even today the site of the Burnetts’ island home can still be seen.

In this stronghold lived Alexander Burnett, 8th laird of Leys. He married late in life, Agnes Lechtoun, a proud and ambitious woman who bore him a son also called Alexander.

When the boy was about six years of age the laird died, so that the duties of the Barony fell to Lady Agnes. These duties suited her well, for she was a domineering woman who loved to exercise her power over others.

One evening when Lady Agnes and the young laird, who was now nearly seventeen years of age, were sitting in the great hall of the castle a servant came running in to tell them that a nobleman and his retinue were calling for boats to bring them to the island. Lady Agnes and the young laird hastened to prepare for the arrival of the stranger, and in a short time Sir Roger de Bernard, from France, and his daughter Bertha were announced.

The de Bernards were related to the Burnetts through a cadet branch of the family which had settled abroad many generations before. Roger de Bernard had always longed to visit the ancestral home of the family, and as France was in a very unsettled state, he had taken the opportunity of bringing his daughter with him.

Lady Agnes and the young laird welcomed their relatives, and to celebrate the occasion a great banquet was arranged for the following evening.

The banquet was attended by many of the neighbouring lairds and their wives, and was a great success. After the feasting was over, Lady Agnes made a speech of welcome, which was replied to by Sir Roger. He thanked Lady Agnes and the young laird for their welcome, and said that he proposed to leave his daughter Bertha in the safe keeping of his kinsman while he returned to France to settle up his affairs, after which he would come back to Leys.

Alexander, the young laird, jumped to his feet and said he was honoured to be allowed to look after Bertha de Bernard, and his words were applauded by all. But one of the company did not relish the arrangement. This was Lady Agnes, for she had already noted the friendship that had sprung up between her son and Bertha.

Lady Agnes had made other plans. She had decided that the laird of Leys should marry into the noble family of the Lords of Lorne, and she did not intend to let anyone upset her scheme.

In a day or two Sir Roger de Bernard bade farewell to his daughter, and left for France.

It was summer and Alexander, the young laird, and Bertha de Bernard spent most of their time in the saddle galloping over the hills and moors, and visiting friends and neighbours. Wherever they went they were popular, for their natural charm was a joy to see, and it was evident that they were deeply in love. Only the Lady Agnes disapproved.

In autumn, Alexander was obliged to go south to see the Abbot of Arbroath about a land dispute. He was uncertain how long his business would take him, and Bertha dreaded his going. She knew only too well that Lady Agnes resented her friendship with her son, so after he left Bertha hardly ever came down from her room in the tower.

Winter came and there was no sign of Alexander returning to Leys. Bertha fell ill of some wasting disease, and by the time spring came round little hope was held out for her recovery.

One day towards the end of June, Alexander returned home, but to his surprise there was no welcome awaiting him. Everything was quiet on the island and hurried to the great hall to find out what was wrong. Imagine his horror when, in the centre of the lofty room, he saw a bier on which lay his beloved Bertha.

His mother, Lady Agnes, crossed the room to comfort him. His brain reeled, and he felt faint. Alexander reached for a cup of wine standing on a table nearby, but his mother snatched it from his grasp and dashed it out of the window into the loch. Not a word was spoken between them, but Alexander understood. Bertha de Bernard had been poisoned.

It was a bitter blow for the young laird, but with the passage of time the memory of Bertha passed from his mind, and life at the castle gradually returned to normal.

About a year after Bertha’s death, the family were sitting at supper in the hall. Suddenly the door swung open and into the room strode Sir Roger de Bernard. He had come back for his daughter.

On his way over from France he had heard of her death and, as he stood at the end of the table, he accused Lady Agnes of killing her. A terrible scene followed, and Sir Roger called down curses upon Lady Agnes who, he said, had broken faith with him and cruelly killed his daughter to further her own ends.

A curious chill seemed to enter the room. The hangings on the walls moved as if by some sudden wind. Lady Agnes sat bolt upright in her chair. She seemed transfixed with horror. Slowly she rose to her feet and screamed “she comes, she comes!” – then with a horrible laugh sank to the floor dead.

When the awful memory of the tragedy was forgotten, Alexander Burnett, 9th laird of Leys, married Janet Hamilton, kinswoman to Archbishop Hamilton, and they were very happy together. Alexander decided that the old island castle of Leys would be better left to its tragic memories, so in 1533 he commenced to build the present Crathes Castle, but did not live to see it completed.

Once a year, it is said, at the witching hour of midnight, the ghostly figure of a woman rises from the site of the old castle of Leys and glides slowly over the hill of Banchory to Crathes Castle. Some say it is the wraith of Bertha de Bernard going to see the beautiful castle built by her lover, while others maintain that it is the shade of Lady Agnes forever earthbound on account of her terrible crime.

The illustration by Fenton Wyness shows the Loch of Leys with its wooden castle built on the crannog. The crannog was an artificial man-made island of safety in the middle of the loch. Above are the Arms of Burnett of Leys balanced on the left by the Phantom in medieval dress.