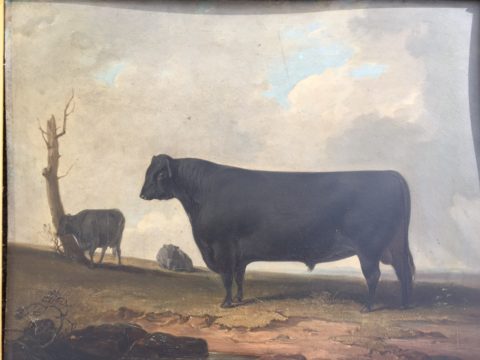 Pedigree cattle have not been particularly prominent in the family history books during recent years, but my attention was drawn recently to some success to a near neighbour, Ken Howie, who owns the Deeside Activity Park (www.deesideactivitypark.com) near Banchory and the Cairnton Herd of Aberdeen Angus cattle. He is setting up an Aberdeen Angus trail which may be of interest to our farming readers.

He tells me that certainly Crathes was a very old herd, and was started long before The Aberdeen Angus Cattle Society existed. ‘Banks Of Dee 12’, was the most celebrated bull of his day. I have a picture which I showed to him and which he indicated may be of him, or possibly the bull’s  father. He walked the sixty miles from Portlethen to Dundee to win his class at the 1843 Highland Show. 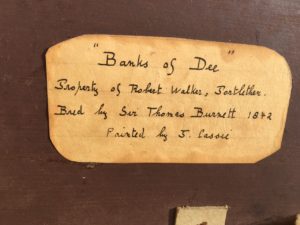 Sir Alexander Burnett had a draft sale in 1856, where the three year old ‘Jenny Lind’, was bought by Robert Walker, Portlethen ( the same man who owned your Banks O’ Dee bull).  He paid £32 5s (possibly three times the average) for her, and she too became a very successful show cow, winning 6 first prize rosettes at The Highland, and other shows.

But the Leys Estate is host to cattle of note. The home farm of Harestone has been winning top prizes for Neil Barclay and his son, Stuart, at many of the major shows for several years. a relative newcomer is Aberdeenshire Highland Cattle herd has very recently been established at Lochton of Leys and only a field away from the Crannog.  Owned and run by Grace Noble, Aberdeenshire Highland Cattle should soon be the subject of a Highland Cattle Centre and ready for a visit at the Burnett Gathering in 2121.