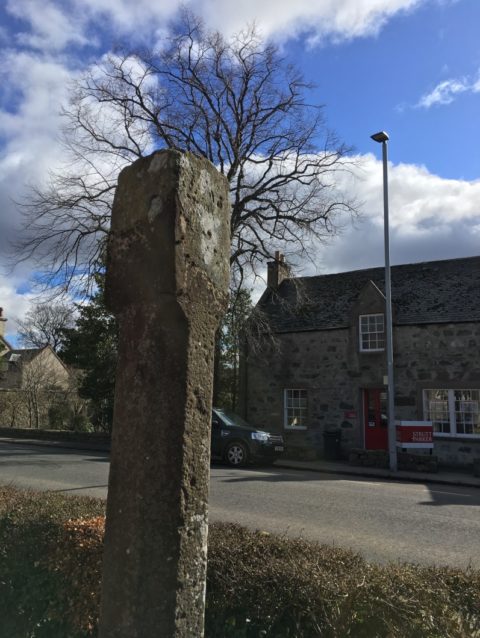 Records of Banchory do not exist  between the time of St Ternan in the 5th Century until the more recent time of 1143 AD when the village again appears in ancient history. About that time, the Abbot of Arborath received a grant of a large portion of land from William the Lion. The  Abbot’s land extended to Banchory Ternan and a new hamlet sprung up in the neighbourhood of what is now the kirkyard. The hamlet was known as Townhead. The  Church and School were built on the oldest part of the present day kirkyard and the foundations of this old church, dating from 1665, remain embedded there.

In those ancient days, large cattle markets were held near the Church and, many centuries later, when the railway was being made in 1852-3, an old Market Cross was unearthed. It was removed from that position and brought to Crathes Castle and was set up on the mound near the middle of the kitchen garden where it remained until 1887 when Sir Robert transferred it to the Burnett Park  which he presented to the village of Banchory.

We have no record of where it was placed in the Gardens at Crathes Castle. However, the kitchen garden was where the Golden Garden was created in the 1960s and the only place where the Market Cross is likely to have been situated is in the centre of nearby Camel Garden and probably where the birdbath is now. This is clearly  shown in the near centre foreground of this 1937 photograph. 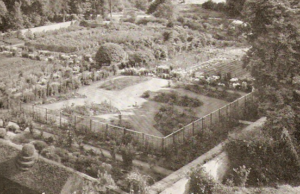 There it remained until 1975 when it was returned to be near its original home and is now near the front entrance of the East Church and opposite the churchyard and St Nicholas House, the former schoolhouse and now the offices of Strutt and Parker, who manage the Leys Estate. A much respected local academic suggests that the Cross may be upside down. Opinions of visitors or readers are welcome.