While once again perusing the internet, looking for any information I could find on my Burnett ancestors, I came across a very interesting article I thought my kin might appreciate. You probably know about the Green Lady of Crathes Castle, and most likely the Green Lady of Muchalls, but have you ever heard of the Edgefield Ghost? Yes, in Edgefield, SC, in 1829, the Burnett’s had yet another ghost. Author, Dale Cox, wrote of it on ExploreSouthernHistory.com :

The story revolves around members of the Isaac Burnett family, who in 1829 were living not far from today’s Sheppard’s Crossroads, which is located on U.S. Highway 25 about 15 miles northwest of Edgefield, South Carolina. Other relatives lived near by, as did members of the

Sheppard, Rogers, Hodges and Andrews families. It was an agricultural neighborhood closely associated with the Baptist denomination.

By all accounts Isaac Nuel Burnett was a stable man, not prone to exaggeration or flights of fancy. He worked hard building his farm and taking care of his large family, which by 1829 included his wife, Hetta (also spelled “Hetha” and “Hettie”), and seven children. Among these was a 10 year old girl named Martha. Born on February 13, 1819, she was the initial focus of the haunting which began in October of 1828. The  best surviving account of what happened at the Burnett home appeared in the Edgefield Carolinian on July 11, 1829:

…The voice was first heard in October last, imitating various noises, such as that of the spinning-wheel, reel ducks, hens, &c. It was first heard by Mr. Burnett, about twenty yards from the house, which led him to suppose it was some of the neighbor’s children, hiding in the weeds and trying to frighten his children. It was afterwards heard in the loft of the house and Mr. B. supposing it to be a bird, sent a boy up to drive it out, but nothing could be seen. It thus continued to perplex the minds of the family for some time, until, at length, one of the children said he believed the thing could talk, and commenced asking questions, which it answered by whistling, pretty much like a Parrot….

As the conversations between the “voice” and the family continued, it began to answer them with spoken words. News of this quickly spread and neighbors started showing up to hear the phenomenon for themselves. Among these was James Sheppard (his name was misspelled “John Shepherd” in the newspaper article), who was considered “a pious and worthy citizen.” Sheppard, in fact, was a state legislator, veteran of the War of

1812 and in 1850 would become the father of a future governor of South Carolina. He was astounded by what he encountered at the Burnett home:

…To ascertain the extent of its knowledge, he asked it various questions about most persons in the neighborhood and their circumstances, which it answered correctly. It told his name and the number of children he had; also, the names of most of the persons present. He asked what it came there for. It replied, “Because it had  no other place to go.” It was asked if it have to do the family any harm, it sad no – it loved the family. It was asked finally if it loved Jesus Christ, to which it made no reply, nor answered any more questions…. 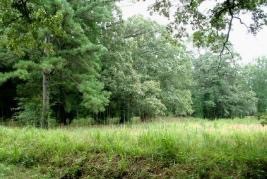 Overgrown fields are all that remain of the farm where the Edgefield Ghost terrorized members of the Isaac Burnett family.

The disembodied voice would not communicate

with Sheppard after that, but it continued to talk with others. The ghost, in fact, took a particular interest in Martha Burnett, the 10-year-old daughter of the homeowner. Unlike the other members of her family, Martha had no interest at all in communicating with the spirit. In fact, she was terrified of it:

…This so alarms her that she generally gets sick whenever she talks of it, and she has been known to quit the house precipitately, when she has heard it alone in the house. Not long since, however, she quoted to it a passage of Scripture, which a pious friend pointed out and advised her to memorize for that purpose, (1 Tim. 1 xv) and it made her hold her jaw, but she persisted in quoting the passage until it hushed, and has not spoken to her since….

The Biblical passage used by Martha to drive back the ghost reads, “This is a faithful saying, and worthy of all acceptation, that Christ Jesus came into the world to save sinners; of whom I am chief.” As had been the case with James Sheppard, the ghost seems to have recoiled immediately from the mention of Jesus. This became even more evident when Isaac Burnett placed a Bible in the area of the loft from which the voice seemed to originate.

The sound of the voice could immediately be heard coming down from the loft into the main room of the house. It told the family it was going away and when they asked why,  it replied that it could not stay. The ghost disappeared from the Burnett home for about two weeks, but made visits to several neighbors who had previously conversed with it. Then, after two weeks, it came back.

Growing more concerned about the nature of the ghost, the Burnett family called on a local minister, Rev. Hodges, to drive it away. Hodges visited the home several times, but the ghost would not speak while he was present. On May 16, 1829, however, while visiting a neighbor the minister learned that the ghost had been speaking that day. He visited the home with James Sheppard and the two decided to send one of the young boys of the family, either 9 year old Daniel or 4 year old Hezekiah, into the house to communicate with the ghost. Rev. Hodges and Mr. Sheppard would then listen from the porch:

…There were but few answers that Mr. H. could understand, but when interpreted by the family, who were accustomed to hear it, he could then trace out some resemblance. Some words however were pronounced very plain, such as kitten, yes, no, goose-quill, &c. The family says, that it generally spoke much more distinctly and could be better understood than on this occasion. Mr. Shepherd says the same. It was understood, however, to say it knew Mr. H. pronounced his name tolerably dismal, said it got acquainted with him there, and that it did not like him. When Mr. H. spoke, and said, “I have come to drive you away,” it was understood to reply, “Do if you dare.”

Rev. Hodges now engaged in a conversation with the ghost that witnesses reported lasted about an hour. Although few details of the discussion have been preserved, at one point the minister encouraged the ghost to whistle a song. It replied that it did not know any, so Rev. Hodges responded by whistling a hymn. The ghost replied that this “would not do” and then “whistled Yankee Doodle very distinctly.”

Something either in that conversation or about that time convinced Mr. Burnett that his children should no longer communicate with the spirit and he forbade them to do so. As a result, by July of 1829, the Edgefield newspaper reported that, “It is now seldom heard.”

The memory of the Edgefield Ghost faded over time. Martha Burnett lived until 1860, when she died at the age of 41. Her father outlived her by

6 years. Many descendants of the family still live in Greenwood and Edgefield Counties in South Carolina. 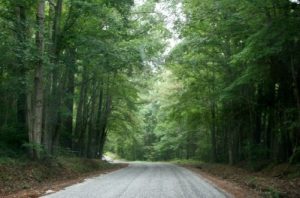 The haunting site today is unmarked and on private property at the edge of the Oconee National Forest. The general area can be seen along U.S. Highway 25 as you approach the bridge over Cuffeytown Creek driving from Edgefield to Greenwood in what is now Greenwood County, South Carolina.”

While I do not believe Isaac Nuel Burnett is in my direct line of Burnett’s, it’s likely he is some relation, as my ancestors also hailed from Edgefield and Greenwood SC. The story’s author, Dale Cox, informed me his ancestors were also from Edgefield, and lived near the Burnett’s at the time of this incident. This story was passed down in his family over the years.

I’d like to give a special “Thank You” to Dale for letting us reprint his article for our family. If you’d like to read his other ghost stories, or articles of Southern history, you can visit the website at ExploreSouthernHistory.com or check out his blog at twoegg.blogspot.com.