Lots to interest visitors in the Fountain Garden, including the recent work on the fountain itself. 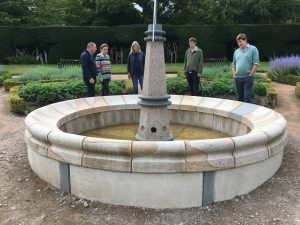 Readers may recall the recent report on the awaited repair to the Fountain in the Fountain Garden.  Apart from the replacement of the figure on the top, the work has now been completed. Chris Wardle, above, was responsible for overseeing the works. 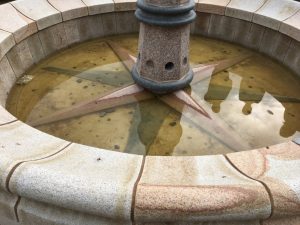 This is how it was before rebuilding. 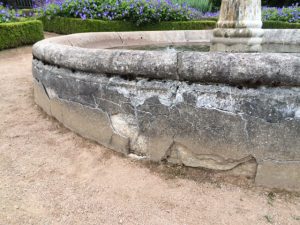 Also requiring attention in the garden are the laurels which are reaching the end of their lives.  In order to maintain the continuity of the appearance of this garden, there has been a programme of propagation in place whereby new trees are being grown in pots and ready to replace those which have to be removed with minimal of destruction to the appearance of the garden. 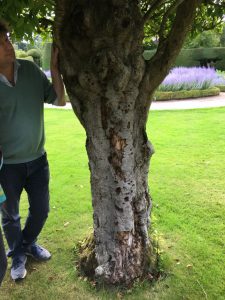 There are other features of note. One is the pair of sun ray designs near the fountain and which have replaced two cement urns. They were desiged by Toby Loveday who was the first gardener from 2010 till 2016 and has now moved to work for the Duchess of Northumberland at Burncastle near Lauder. 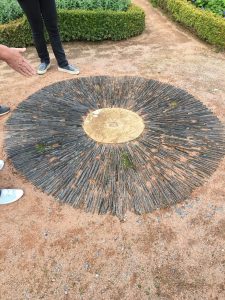 Another is the old Fountain Garden man who has appeared from the reparation to the yew hedges. Some readers may find his features more difficult to identify than others. He has no name as yet other than the Old Man of Crathes 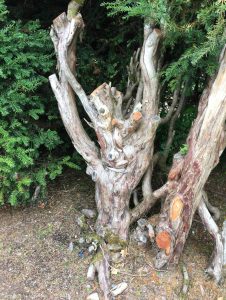 Particularly of note at the moment is the Perovskia or Russian Sage. 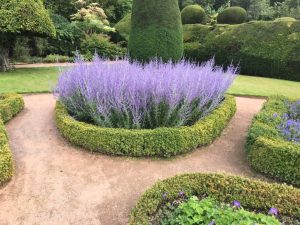 More impressive is the Eucalyptus nitens, which was planted in 2009 by Chris Wardle as a 1.5 metre tree from seed grown / sown in around 2006. It demonstrates the quality of the soil and climate of the garden at Crathes having already reached a height of about fifty feet. 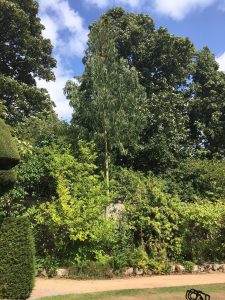