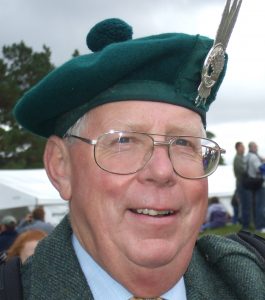 before ending an ancient feud with a rival clan

David Irvine of Drum was Scotland’s clan chief who finally put an end to a 600-year clan feud and who, at the sexcentenary of a notable battle, exchanged swords with the descendant of his ancestor’s enemy. 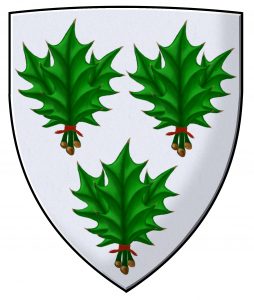 In private life, David of Drum was the most personable of clan chiefs. From his home in Banchory, Kincardineshire, he and his wife Carolyn headed across the world to participate in Clan Irvine activities. In Scotland, he proved a notable prime mover: as treasurer of various charities such as the Standing Council of Scottish Chiefs; Wallace 700 (the charity remembering Sir William Wallace); and the Scout movement. He was a patron of Aboyne Highland Games, a regular face at the gatherings of Braemar, Ballater and Lonach; and a member of the Royal Celtic Society. 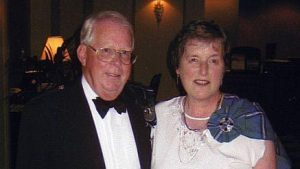 His friendliness and charm were at odds with a bloody history involving a centuries-old feud with neighbouring Clan Keith. It began in 1402 when Irvines slaughtered an invading party of Keiths at the Battle of Drumoak. It concluded only in 2002 when David and his opposite number Michael, 13th Earl of Kintore, finally met to shake hands and sign a peace treaty. This they did on the only piece of neutral ground between their original holdings: the middle of Park Bridge over the River Dee at Banchory. Overseeing the accord as impartial witness was the Marquess of Huntly, chief of Gordon.

The fighting talent of the Irvines was notably displayed when Sir Alexander Irvine of Drum in his role as chief led his clan in the Battle of Harlaw in 1411. Sir Alexander engaged in a duel with Red Hector of the Battles, chief of Maclean of Duart. Both warriors died from wounds inflicted upon each other. It became a tradition that on the date of the battle every century, the laird of Drum and the chief of Duart would exchange swords as a sign of peace. At the 600th anniversary of Harlaw in July 2011, David and Sir Lachlan Maclean of Duart maintained the custom.

In the early 14th century, King Robert Bruce brought his promising clerk, William de Irwyn, to northeast Scotland, with William becoming sufficiently well regarded by 1323 to be granted a free barony over lands in lower Deeside at Drum, a royal hunting forest and Tower of Drum. The lairds of Drum were fiercely Royalist and joined the Jacobite forces at both the Battle of Sherriffmuir in 1715 and the Battle of Culloden in 1746.

David spent a happy childhood at Drum, soaking up knowledge of his family history — which in later years proved both encyclopaedic and entertaining. He would point to his surname as being the only one he knew whose variations started each of the five vowels plus the consonant Y, and could nimbly identify the 19 ancestors named Alexander out of 26 heads of the family. His eldest son and heir Hugh, now 27th of Drum, follows the tradition of chiefly Irvines in assuming the additional name of Alexander, with Hugh’s eldest son Thomas, David’s grandson, already bearing the name.

For 653 years, Drum Castle was continuously occupied by the Irvine family. When David’s uncle, Quentin Forbes Irvine, 24th laird, gifted the castle to the National Trust for Scotland for the benefit of the nation, Drum relinquished the Scottish record as the oldest continuously occupied house by one family to Traquair House, Innerleithen.

David was schooled at Blairmore, Aberdeenshire and Radley College — and to the end of his days, he remained a proud Old Radleian. Determined on a financial career, in 1958 he joined Cunard as a purser, sailing all seven seas on the Caronia. Transfer to the Queen Mary brought an introduction to a Carolyn Colbeck, fellow crew member serving as a physiotherapist and granddaughter of Captain William Colbeck, Antarctic explorer. They married in 1964, after which David entered the Midland Bank, ultimately becoming a senior manager in Manchester and settling his family in Cheshire. Their family comprises Hugh, a corporate lawyer in the Middle East; Charles, an environmental lawyer in the US; and Katherine, a senior social work manager in Aberdeenshire. 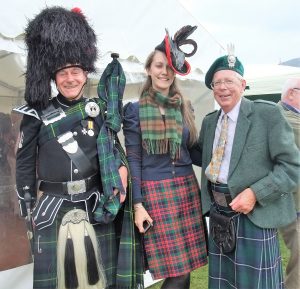 David’s heart was never far from family matters, and in 1996 he and Carolyn moved to Banchory on Deeside, within sight of the ancient lands of Drum to be closer to family and his seven grandchildren. Chief or no chief, David proved the ultimate democrat. He knew everyone, and everyone knew David. A lifetime golfer — he sank a hole in one on his local Deeside course — David once partnered fellow chief Jamie Burnett of Leys in a Commoners v Peers match against the Marquess of Huntly, chief of Gordon, and Lord Forbes, chief of that name. As he later related: “In tune with these democratic times, we commoners won!”

A veteran non-dancer, David became an almost overnight convert to Scottish country dancing after his move to Deeside, and rarely a Wednesday passed without the chief of Irvine being on the dance floor at Kirkton village hall. A lover of the Scots language, he described himself as “a lifetime learner of Doric”, and rejoiced in conversing, dram in hand, in the native speech of Aberdeenshire. He appeared in Who’s Who In Scotland, cheerfully christening the latter “Fa’s Fa”. His motto Sub Sole Sub Umbra Virens (Flourishing alike under sun and shade) reflected the ability of the holly adorning his coat of arms to thrive in times both good and bad — as has the family down the centuries.