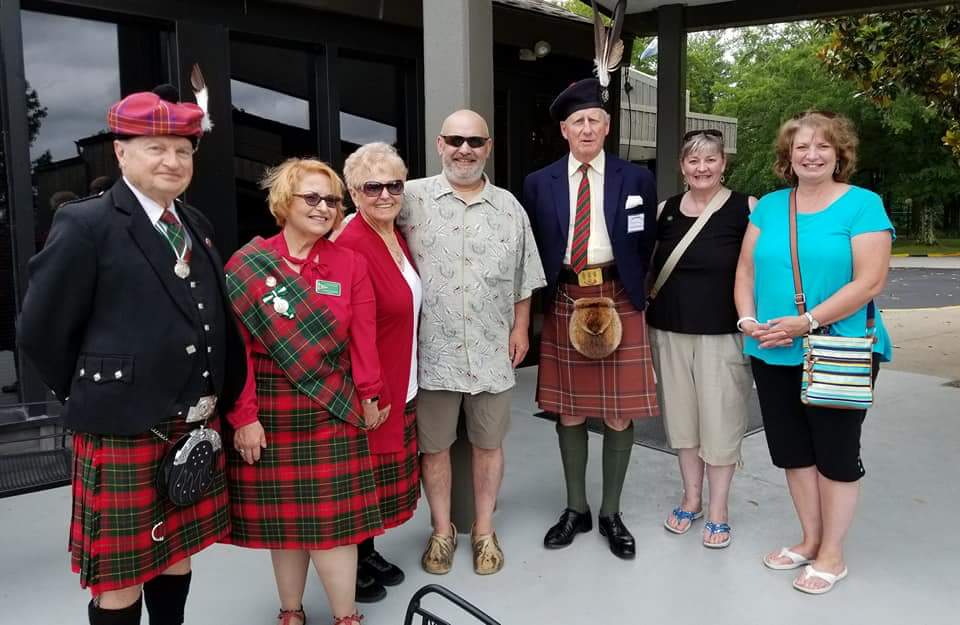 I was very honoured to be invited to be Chief of the 2018 Games for which Burnetts were the Honoured Clan.  We were very grateful for the hospitality of Colonel Bob Harrison and his wife, Marti, and all the rest of their team. There were many special events during the week, which included the marriage on the Games Field of the retiring Games Secretary, Maureen Hendrick.

It was very pleasing that and so many Burnetts appeared at the Games which are held at the Barren River Lake State Resort Park in Lucas Kentucky.  Over 60 Burnetts attended during the three days and the photograph shows those who were present at the end of the final day.

On the first evening, we were grateful for the hospitality of Steven Burnett and the Houseof Burnett and, who also provided me with a bottle of Maker’s Mark Whisky

Burnetts provided a major contribution to the piping with Jonathan Blum and Robert Burnett who joined the massed bands. I was privileged to have my own piper,  Karen Brumley.

There were occasion when comment became less obvious, but hats off to Ben Burnett pictured here with his father Barry and Burnett Lieutenant, Jim Burnette, to whom I was most grateful for looking after me from and back to Nashville.

All Burnetts would be moved that Brenda Burnett travelled the long way from Hoover, Alabama, to attend the Games. Brenda’s husband, Jerry, sadly died in November.  Jerry was a great supporter of the House of Burnett and he and Brenda attended the Reunion in Las Vegas and the 2013 Gathering at Crathes

The House of Burnett was well represented by our President and Lieutenant, Jacky Daugherty, with her mother, Nicole Zimmerman who has taken on much of the House of Burnett Secretarial responsibilities, and Leland accompanied by Portia Pruitt. Nicole Zimmerman also won medals in all three categories: Highland Fling 2nd place, Sword Dance 2nd place, Seann Truibhas 3rd place. It was a good day for clan Burnett (although for now her dance tartan is Cooper!).

There were many others whom I must thank for their attendance and support.  Not least, our other Lieutenant, Jim Burnette, who drove me to and from Nashville and wherever during the Games.

The late John Burnett’s family were represented by Britton with whom I was very pleased to meet Tina Hai. His representation might have been larger if his daughter, Erin, had understood Britton when had suggested that she attends the Glasgow Games to which he and I were both going. Some compensation that I was pleased to meet Erin and her husband, Jayme, at Crathes the day before I left for the US. (See visitors to Crathes) . Erin allows me to relate that, when I asked her why they came to Scotland at that time of the year, she told me that it was for the visit to Crathes to coincide with the Glasgow Games! Barry Burnett took first prize in the Best Knee competition.

Jacky, Jim and I were tasked with the invidious responsibility of selecting the best Clan Pavilion which we eventually agreed was Clan Fraser.