Susan Kromer Hunt lives in Cincinnati and recently was reading a centennial publication of the oldest Observatory in the United States which is in Cincinnati. That book was published in 1944.

It was about Jacob Burnett who worked with former President John Quincey Adams to get the observatory built.  That original telescope is still in use today. https://www.cincinnatiobservatory.org/

Susan cannot confirm the lineage (see attachment) as his father is supposed to be according to the book the Dr William Burnett Surgeon General for the Continental army, he was a surgeon during the Revolutionary War but according to other sources he was never Surgeon General. Also his line according to the internet goes to the House of Ley, just like John and Lucretia was supposed to go there.  There is not a tester for this line yet so I have no idea of his true lineage as I have not researched it. 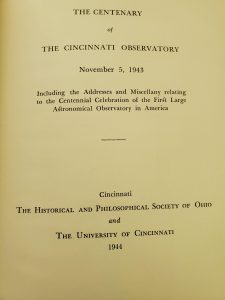 Here is the information from the book.  It is in excerpts featuring Jacob Burnett. The italics is information that Susan added for clarity

On May 23rd 1842 within a month of when the public meeting was called in the hall of Cincinnati College where the Mercantile Library now stands, Judge Burnett presiding to organize the Cincinnati Astronomical Society. Subscription of $6,500 or $25 per share were announced.  They came from no particular class or order of men, but from the whole people of all degrees of wealth banded together. Each share would admit two of the family to the privileges of the Observatory when built or else a single gentleman escorting a lady. 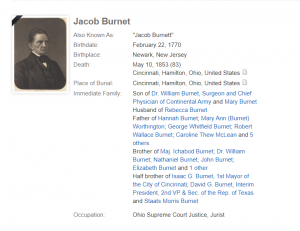 John Quincy Adams (6th President and  son of John Adams the 2nd President of the United States) the most distinguished living American, the foremost champion of Astronomy in America led as of right the way to the dedication of the new Observatory on Nov 9th 1843. President Adams was introduced as the keynote speaker by Jacob Burnett. Judge Burnett was chosen because he stood head and shoulders above his fellow citizens.

Jacob Burnett was born in 1770 at Newark New Jersey, graduate of Princeton had come to the frontier post of Ft Washington in 1795 to practice law. Almost at once John Adams appointed him to the legislative Council of the Northwest Territory.  He was leading counsel for Biennerhasser indicted with Aaron Burr (Burr was Vice President for Thomas Jefferson’s first term) for treason. He organized the Miami Exporting Company, served as president of the Bank of Cincinnati which boasted of a capital of $600,000 and became the president of the Branch Bank of the United States. He lost his entire fortune in bankruptcy after the Branch closed in 1821 as well as the great mansion he had built at Third and Vine Streets. Thereafter undismayed he went on the Supreme Court of Ohio, was elected to the Senate of the United States, published the “Notes on the Northwest Territory” and in 1840 managed the Presidential campaign of William Henry Harrison (9th President of the United States). His city Cincinnati in his day was the 4th largest in the country, by far the most important place west of the Atlantic Seaboard.

This park was named in honor of Judge Jacob Burnet, a Cincinnati pioneer who became a U.S. Senator and the “father of the Ohio constitution.”

Admin at Family Tree DNA for the Descendants of John and Lucretia Burnett of Essex County VA and Rutherford County NC Burnetts.