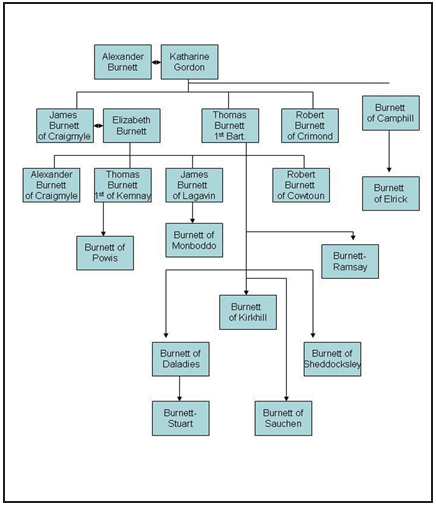 Linking Our Family Trees Back to Our Ancient Burnett Lines

For many years, our family trees relied solely on hours of tedious research online and in archives. Many brick walls were permanent, with most researchers stuck in the 1700’s.  A relatively new DNA test, called the Y-DNA test, has broken these barriers wide open.  While historical records will always be required, this new test can instantly identify your ancient Burnett family line.

In this month’s “Banner”, Shaun Burnett of New Zealand shares his recent success story. Shaun had always thought that his Burnett line descended from the family “Burnett of Barns”.  He and other testers had traced their lines through historical records to Alexander Burnett b. 1729 in Ettrick, Selkirkshire, Scotland, but no records could be found to link this man to the Burnett of Barns line.

A few weeks ago, he connected with a tester with whom his results matched, proving they shared a common male Burnett ancestor. This tester had proved his line all the way back to John Burnet b. 1390 in Burnetland, Peeblesshire, Scotland.  Since this tester matched Shaun and the others in his group, it proved that the entire group descends from Burnet of Barns!

This is an enormous success for the Burnett Project that we hope to replicate across other groups. From the test results, it appears that there were between 5 and 10 separate Burnett lines.  If our project can find testers who can prove their lines, using historical records, back to the original Burnett lines, we will not only all have the benefit of knowing which clan we descend from, but we will also identify which clans were part of the original Burnet of Leys group and which have other origins.

The Burnett’s of Leys are the biggest Burnett family in Scotland today and most Burnett’s of Scottish descent will be from various lines originating from the Burnett’s of Leys.  A number of these lines became significant families in their own right, holding their own Burnett coat of arms and official titles and offices.  Much of their history has been carefully recorded in the books available on the House of Burnett website, but now far removed in various nations around the globe many of us are asking, from which line do we belong?  With Y-DNA testing we will one day learn the answers.

Shaun’s story is a very exciting achievement for the project. We hope to identify more testers in Scotland that have proven pedigrees back to these ancient Burnett families.  Testers must be male and must be fathered by a Burnett who is of a pure male Burnett pedigree.  The Y-Chromosome is passed only from father to son, to son, and so on.

If you have suggestions on how we can find these testers, or would like to participate in the Burnett Project, please contact terrybarwin@gmail.com. Terry is a volunteer administrator in the Burnett YDNA Project.

The Burnett’s of Barns Y-DNA News

Every so often something comes along in your life and boom!  It changes everything. For me this happened not on the scale of solving world peace or winning the lottery but as a recent DNA revelation in the quiet backwater of my life.  Like many of you, my surname is Burnett, a proud and honourable name, but for me it’s always been of an unknown origin. When I say ‘unknown’ I mean, from which Scottish Burnett pedigree did my ancestors originate: Leys, Leys of Craigmyle, or Burnett’s of Barns, or who?  For many years I’ve known my great grandfathers spent almost two centuries in the Ettrick valley on the Scottish Borders, but now I’m far removed in New Zealand where I’ve struggled to find any hint of their earlier origins.

As a first port of call some family members travelled to Crathes castle near Aberdeen, Scotland, the ancient home and famous gardens of the Burnett’s of Leys, and like all Burnett’s they were well received but ultimately came away with the message “Sorry, we can’t place you.”  Our story just didn’t fit the Leys family tree. 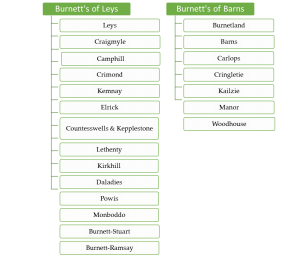 We knew little of our Burnett heritage in Scotland.  There was the family legend that we had a relative fight at the battle of Pinkie Hill in 1547 but that was about it.  From the mid 1800’s things were well documented in a diary and, of course, there were various census lists and church records of the period to work from but they never reached back far enough… then came the DNA bombshell!  Thanks to the Burnett Y-DNA Project many Burnett males have taken a Y-DNA test and were grouped according to DNA similarities. Men from my line of Burnett’s participated in this project from Scotland, Canada, Australia and New Zealand but comparing ourselves to each other only confirmed our family tree and provided few clues of our pedigree simply because we were a group of our own – a half dozen Burnett’s alone amongst many.  Then a Burnett from the Burnett’s of Barns confirmed his Y-DNA results and delivered our bombshell. We matched so closely that it was obvious we shared common paternal ancestry, and although my family haven’t yet found records linking us, our Burnett’s of Barns Y-DNA match has a well-documented family tree which left no question as to his pedigree.

Once you know these things little bits make more sense: for generations my ancestors had lived only a days horse ride from the seat of the Burnett’s of Barns on the River Tweed (http://www.barnstower.co.uk), and marriages in their history are from some of the same families that married into ours.  And I read that in the late 1400’s John Burnett of Burnetland on the banks of the River Bigger had a son William Burnett who became the first “Burnet of Barns” and also had the unlucky distinction of fighting at the battle of Pinkie Hill, fortunately surviving his wounds. Pieces were beginning to fit together.  Finally we could be placed.

The Burnett’s of Barns are a long standing Scottish family said to have been on the Scottish border since about 1100, but known for certain to own land at Barns on the River Tweed since the 1400’s.   Perhaps the most famous of these was William Burnett (1553 – 1646) “The Hoolet of Barns” who apparently could see in the dark like an owl. He appears to have been of great physical strength and was certainly not shy of a skermish with his name occasionally appearing in the Warden’s register as he harried border foes with the rough justice of his time.  Later author John Buchan fictionalised the Hoolet’s life with his novel “John Burnet of Barns,” but a generations later, as industrialisation brought rapid change to the border country the last of the estates were sold in 1838 and the Burnett’s of Barns were all but gone from their historical home. It’s interesting to note that from 1841-1931 about 2 million other Scots immigrated to the far shores of America, Canada, Australia and New Zealand.

Barns Tower, on the River Tweed, Scotland, is the historical home of the Burnett’s of Barns and is available as holiday accommodation: see www.barnstower.co.uk

So what did the Y-DNA results actually tell us?  Well at first it told my family that we didn’t fit the typical profile of the descendants of Leys.  My group of less than a dozen testers falls into haplogroup group I-M253 which is distinctly different from the R-M269 haplogroup most readily associated with descendants from the Burnetts of Leys.  In short we have to go too far back, many, many thousands of years, before we share a common paternal ancestor:

Haplogroup I-M253 emerged about 5000 years ago in Scandinavia, probably Denmark, and is considered the the original paternal lineage of Nordic Europe.  It was propagated around Europe by the ancient Germanic tribes and the Vikings, and in terms of national averages it’s found in about 30-35% of Swedish, Danish, Norwegian and Finnish males.

Haplogroup R-M269 emerged some 10,000 years ago and is now the most common Y-DNA lineage in European males, carried by an estimated 110 million.  It’s been associated with the Italo-Celtic and Germanic peoples and it increases in frequency across Europe from east to west, reaching peaks in Wales at a rate of 92%, 82% in Ireland, 70% in Scotland.

It was clear; these two Burnett families have different genetic foundations and it’s probable they began as separate families.  This also fits some inferred facts of our respective lines: where the Burnett’s of Barns are considered Norman in origin, George Burnett in his 1901 book “The Family of Burnett of Leys with Collateral Branches” suggests the Burnett’s of Leys were of Saxon descent, although both of these points are conjecture. 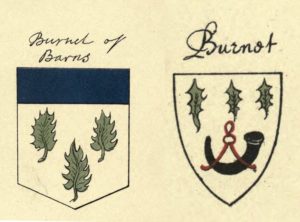 The Different Burnett Arms, as recorded in the book, ‘Scottish Arms: being a collection of Armorial Bearings, AD. 1370-1678’

In practice this haplogroup level is zoomed out too far and is looking back too distant to make sense of surnames and families titles, however a Y-700 test can allow comparisons that offer a closer look at your paternal relationships.  In my case, even at 37 markers I show only three mutation differences with the descendant of the Burnett’s of Barns, whereas the group considered descendants of the Burnett’s of Leys have near a dozen differences with me. Greater than six at this level and it’s said “The two men are totally unrelated within the genealogical time frame…”

As more testers join the Y-DNA pool it should become possible to roughly understand your ancient journey through Europe.  The further back you look, thousands, and tens of thousands of people become “related” but with research and sharing, Y-DNA enables you to narrow your focus to ancient paternal connections between families and locations, and slowly a new chapter in your history can emerge.

I expect that there will be more to come on the differences between these two Scottish Burnett families.   Perhaps the ambiguity surrounding our early Burnard’s in Scotland, from which the name Burnet is derived, will become clearer as we investigate the Y-DNA results more thoroughly.  Indeed. If I were a betting man, I’d gamble that the history books will soon be revised.

On a personal level I have also come to appreciate that for centuries a granite slab in a graveyard with your name and details chiselled in it was the best way to show that you existed in this particular time and place.  But it’s all changed. Technology has marched on and will keep marching on and I suppose now one of the best ways to record your existence is to take a Y-DNA test and preserve your details forever; to capture now with the most clarity we can manage that which has gone into you across the centuries and made you unique.  Who I am, what makes me a Burnett is something I want to leave for my child and his children to come, and for that my DNA is better than granite. Certainly all the gravestones in Scotland, and my family catalogued our share, could not provide the answer and ultimately the connection I now feel towards the Burnett’s of Barns.