Visitor to Crathes may notice that several Horse Chestnut (Conker) trees in the vicinity of the Castle have sadly been felled. This is due to a harmful species of honey fungus called Armillaria. The fungus appears as black bootlaces or ‘rhizomorphs’, thick travelling fungal structures which can be seen where the bark has fallen off the tree trunk.  The National Trust Ranger, Toni Watt, describes this as strangely beautiful in their own right forming a geometric pattern all the way up the trunk, but it does result in the roots rotting and consequently the trees have to be felled. 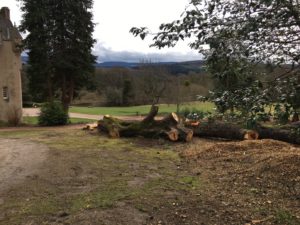 Visitors may have noticed the removal of the abundant common Rhodendron or rhododendron ponticum in the vicinity of the castle. Whilst providing both beauty and shelter, they are prone to harbouring a number of diseases which affect other plants and shrubs. Such diseases may be unwittingly brought by visitors and so the rhododendron.

Trees have long been an important part of the Crathes landscape. It was the storm of 1953 that devastated the woodlands, most of which were felled by the wind overnight. Those around the Castle were least affected due to the fact that, by growing alone, they were stronger than those which grew in relative shelter. During 2015, Chris Wardle, the Head Gardener at Crathes, set out a project to assess the tree collection at Crathes. The result of this is confirmation that Crathes has 3 British Champions; (Betula dahurica, the Dahurian Birch, Eleutherococcus trifoliatus and Zelkova x verschaffeltil) and 16 Scottish Champions.

Behind the fallen trees in this photograph is the horse chestnut tree in front of the Castle. I know that it has yet to achieve a very great age, as I remember well when it was planted to replace a huge tree which we spent much time climbing. 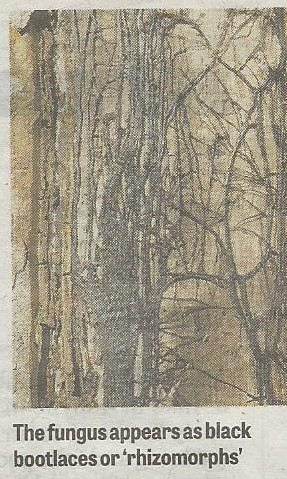 “Man stole the fruit, but I must climb the Tree,
The Tree of Life, for all but only me.”