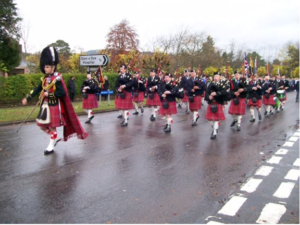 Rob Brownfield, the Drum Major, has updated me on the activities of the Band which is clearly flourishing. I hope that we can persuade the members to do something a little special during our next Gathering. Although numbers dipped a little mid-year, they are on the up again and the band had a good turnout for the Armistice Sunday parade. There are around 25 in the band, (with only one non-Burnett kilt!) with a further 8-9 learners in the side-lines.

And a bit of military history. Whilst researching a Great Uncle (Lieutenant Claude S Brownfield, 6th Gordons), Rob  came across the photograph dated September the 9th, 1939

It is of my grandfather, Major-General Sir James Burnett of Leys, inspecting members of the 5th Battalion, The Gordon Highlanders at Stonywood Park, Aberdeen. Many of these men were later transferred to the 7th Gordons, based in Banchory. From what  he can gather, this inspection was prior to the Battalion being divided into those old enough to be sent to France, to serve in the 51st (Highland) Division, which was the first Territorial Division to cross over to France in 1940. Those under the age limit who were transferred to 7th Gordons, a TA unit based in Banchory. You had to be 18 to be deployed and 16½  to join, which suggests that a great many in the photo were under 18 as around 1/3rd transferred to 7th Gordons. 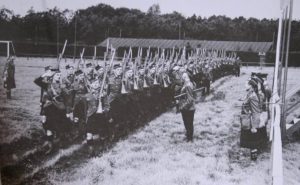