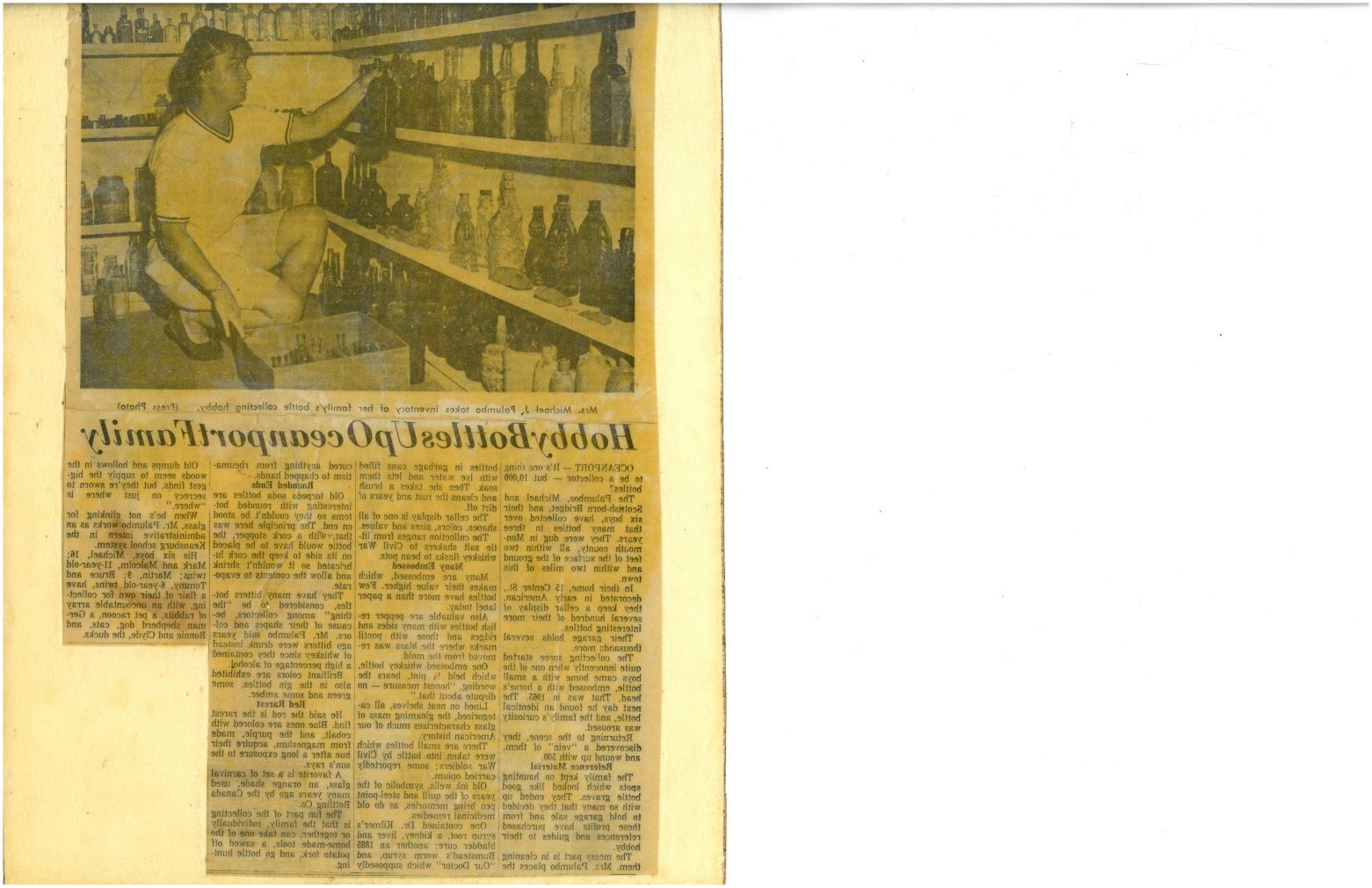 Bridget Forbes Burnett and Her Bottles

Mark Palumbo recently came across this newspaper article from long ago. His parents were great bottle collectors during their time in New Jersey. Banner readers might be interested and I have placed a transcript below for those who may find the article difficult to read with the type size and yellowing with age.

The Palumbos, Michael and Scottish-born Bridget, and their six boys, have collected over that many bottles in three years. They were dug in Monmouth country, all within two feet of the surface of the ground and within 2 miles of this town.

In their home, 15 Center St, decorated in early American they keep a cellar display of several hundred of their more interesting bottles.

The collecting spree started quite innocently when one of the boys came home with a small bottle embossed with a horse’s head. That was in 1965. The next day he found an identical bottle, and the family’s curiosity was aroused.

Returning to the scene, they discovered a “vein” of them, and wound up with 500.

The family kept on haunting spots which looked like good bottle graves. They ended up with so many that they decided to hold a garage sale and from these profits have purchased references and guides to their hobby.

The messy part is in cleaning them. Mrs Palumbo places the bottles in garbage cans filled with lye water and lets them soak. Then she takes a brush and cleans the rust and years of dirt off.

The cellar display is one of all shapes, colors, sizes and values.

Many are embossed, which makes their value higher. Few bottles have more than a paper label today.

Also valuable are pepper relish bottles with many sides and ridges and those with pontil marks where the blass was removed from the mold.

One embossed whiskey bottle, which held ¼ pint, bears the wording “honest measure – no dispute about that.”

Lined on neat shelves, all categorized, the gleaming mass of glass characterizes much of our American history.

There are small bottles which were taken into battle by Civil War soldiers; some reportedly carried opium.

Old ink wells, symbolic of the years of the quill and steel-point pen bring memories, as do old medicinal remedies.

One contained Dr Kilmer’s syrup root, a kidney, liver and bladder cure;another an 1885 Bumstead’s worm syrup, and “Our Doctor” which supposedly cured anything from rheumatism to chapped hands.

Old torpedo soda bottles are interesting with rounded bottoms so they couldn’t be stood on end. The principle here was that, with a cork stopper, the bottle would have to be placed on its side to keep the cork lubricated so it wouldn’t shrink and allow the contents to evaporate.

They have many bitters bottles, considered to be “the thing”among collectors, becaouse of their shapes and colors, Mr. Palumbo said years ago bitters were drunk instead of whiskey since they contained a high percentage of alcohol.

Brilliant colors are exhibited also in the gin bottles, some green and some amber.

He said the red is the rarest find. Blue ones are colored with cobalt, and the purple, made from magnesium, acquire their hue after a long exposure to the sun’s rays.

A favourite is a set of carnival glass, an orange shade, used many years ago by the Canada Bottling Co.

The fun part of the collecting is that the family, individually or together, can take one of the home-made tools, a sawed off potato fork, and go bottle hunting.

Old dumps and hollows in the woods seem to supply the biggest finds, but they’re sworn to secrecy on just where is “where”.

When he’s not clinking for glass, Mr. Palumbo works as an administrative intern in the Keansburg school system.

His six boys, Michael 16; Mark and Malcolm, 11 year old twins; Martin, 9; Bruce and Tommy 5 year old twins, have a flair of their own for collecting, with an uncountable array of rabbits,  a pet racoon, a German shepherd dog, cats, and Bonnie and Clyde, the ducks.