Visitors to Crathes during the last few weeks included Sharon Bassett from Melbourne. Sharon with her husband Damian Basset, whose mother Carmel is a Burnett and has been to Crathes on more than one occasion, were in Aberdeen on business. Damian works for Swire Mining. Sharon is a Crawford and so had a double reason to be at Crathes

We are very sorry not to see good friends for many years and are equally pleased at the possibility of renewed contact – but there is some disappointment when if it is not to be. 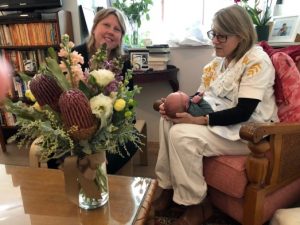 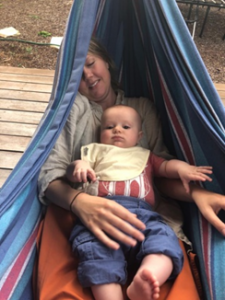 Daniel and Hildy Burnett Potts have been on the other side of the globe for too long. Daniel was Professor of Archaeology in Sydney for many years and is now Professor of Ancient Near Eastern Archaeology and History Institute for the Study of the Ancient World at New York University. They now live in a beautiful area, the lower Hudson Valley, in Garrison NY, just across the Hudson River from West Point.

However, there has been the occasional family visit to Crathes. Rowena was at Crathes with friends a few years ago and is now married to John Attridge. They love in Sydney where he is a Senior Lecturer in English at the University of New South Wale and have a beautiful baby boy named Ambrose.

Rowena also got her PhD in social anthropology from New York University. Dan and Hildy’s younger son, Hallam, now 25, also graduated with a BA in philosophy from NYU in May and is currently living in Brooklyn and working in Manhattan. The Crathes Burnetts, with few academic qualifications, are put very much in the shade by many of their kinsfolk!

Dan and Hildy’s son and partner, Morgan and Maddie, were to be at Crathes last month, but unfortunately we were not able to be here at the same time. However, we hope that their visit is still on the cards

More should be said about the closer Burnett cousin. Hildy is an accomplished sculpture and the following is more than worthy of a place in the Banner. 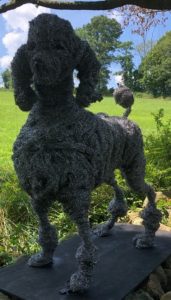 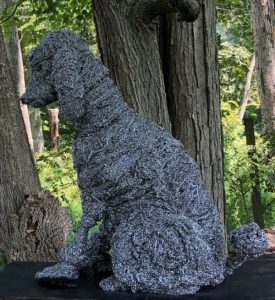 We hope that they will be back to Crathes before long.

Hildy’s sculptures are not the only ones to make the November Banner. The Crathes has been adorned with a number of carvings heralding each of the nature trails and made by Gary Orange www.garyorangewoodcarving.co.uk 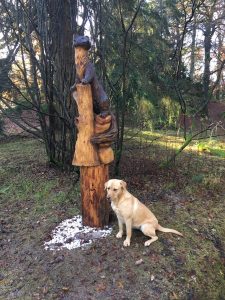 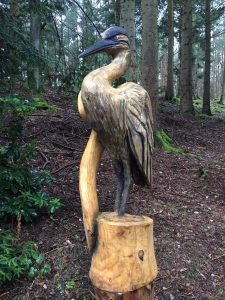 Crathes was very sorry to lose recently one of its most generous benefactors to the National Trust for Scotland and in particular to Crathes and Craigievar. Professor Young was a British medical scientist best known for his work in the field of Magnetic Resonance Imaging. A Fellow of the Royal Society and of the Royal Academy of Engineering, he received the Order of the British Empire in 1986. There must be millions of people, including myself, who have benefitted from scans in an MRI machine and for this gratitude must go largely to Professor Young. A notable legacy of his generosity at Crathes is the dragonfly in the Pool Garden beside the Castle 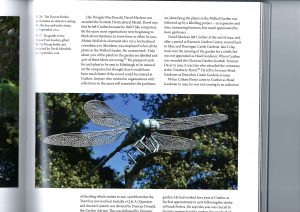 Alexander, as our local member of the Scottish Parliament, again laid wreathes on Remembrance Sunday at the Banchory War Memorials. I have included this in the Banner on previous occasions. This year, there was a special Burnett wreath for our family cemetery at Crathes. 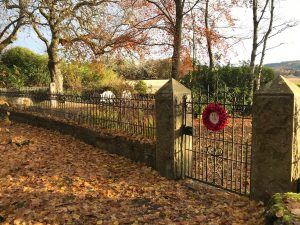 Alexander also caught up with some of his Russian ancestors at an exhibition in the Holyrood Palace Gallery. 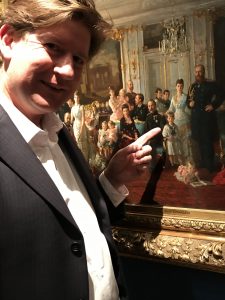 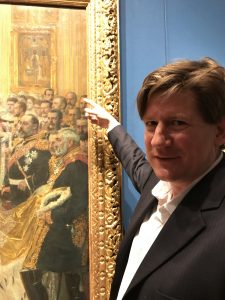 It is relevant, although a little tenuously so, to mention Alexander’s speech on Scottish Science in Parliament last week.  For possible interest, herewith

I’m delighted to be speaking in this debate today highlighting Scotland as a Science Nation.

And this debate is happening just 2 days after the 160th anniversary of the publication of Charles Darwin’s theory of evolution.

What relevance of this, you may ask, to Scotland’s scientific history.

And in answer, I am proud to say that the concept of evolution actually originated nearly 100 years earlier, here in Scotland by an ancestor of mine, James Burnett, Lord Monboddo.

Some scholars consider Monboddo as a precursive thinker in the theory of evolution, and credit him with anticipating the idea of natural selection that was read by and acknowledged in the writings of Erasmus Darwin.

Charles Darwin subsequently read the works of his grandfather Erasmus and later developed the ideas into a scientific theory.

Deputy Presiding Officer – I’m not sure if this constitutes a registered interest, but I’m more than happy to declare it as one.

Now Monboddo, in addition to being the father of Robert Burn’s muse Eliza, was an eccentric Scottish judge, as well as a scholar of linguistic evolution and philosopher.

He is most famous today as a founder of modern comparative historical linguistics.

He came from the Age of Enlightenment which saw Scotland produce a great selection of scientists discovering in a range of fields.

From chemists and physicians such as Joseph Black, best known for his discoveries of latent heat, specific heat and carbon dioxide – and has been honoured with chemistry buildings at both Glasgow and Edinburgh Universities named after him.

We also had the fortune of George Forbes, an electrical engineer who experimented in using carbon for the brushes in electrical motors making it the universal choice in electricity generation to this day – a concept critical to our decarbonisation program.

And of course, the public today will be glued to our speeches today because of John Logie Baird, who was one of the inventors of the mechanical television and was the first person to publicly demonstrate the colour television system.

Scotland has a proud history of scientific endeavour and we are home to a number of UK scientific institutions, with Scotland’s universities being world leaders in the scientific community.

We are also fortunate that the future generation still has many budding scientists coming through our schools.

On Friday, I was delighted to visit some Banchory Academy students who had taken part in an international 90-mile race at Silverstone in October with their electric car that they had built from scratch.

It is great to see students in our schools taking part in initiatives that will be integral to our future.

And that education must flow through to business.

Just this morning, I met with the CEO of ABB who spend some £1.5bn on R&D annually and are the second largest supplier of robots in the world.

Their work from the Robotorium at Heriot-Watt to the carbon capture demonstration plant at Imperial College in London show how business is leading the way but how it is for Governments to set out the path.

Now science affects all industries –and the NFUS notes that “the agricultural industry is founded upon scientific principles and for many years, advancement of the sector has been driven by world-leading research conducted within Scotland’s science and research institutes.”

Because science in agriculture is vital in helping combat climate change.

With ambitious targets, it is essential that our agricultural industry find new and innovative ways to reduce their emissions.

In my Shadow spokesperson role for Business, Energy and Innovation, I particularly enjoy getting to engage with companies across Scotland in ways they are finding to create new solutions.

One such organisation are the Data Lab Innovation Centres that work in Aberdeen, Edinburgh, Inverness and Glasgow.

Whilst data science is not as well known a field, work in this area will soon be commonplace in businesses across Scotland and the UK, with it expected to contribute over £20billion to Scotland’s economy by the end of next year.

I am pleased that being part of the UK has such a positive impact on our life sciences.

It is encouraging to read that the UK life sciences sector is soaring with record turnover of over £70 billion.

SMEs now account for 82 per cent of businesses and 24 per cent of all UK life sciences employment.

And in 2018 – we saw the UK Government publish Part 2 of its life sciences sector deals which will help ensure new pioneering treatments and medical technologies are produced in the UK, highlighting the progress made, as well as new commitments from our UK government and the wider industry.

However, due to the SNP’s obsession with independence, we have seen important issues such as progress in STEM subjects hindered up here in Scotland.

And the proof is in the figures – as the number of employers flagging STEM skill shortages has increased.

In 2015, the Scottish Government’s own annual report on STEM found that ‘the proportion of STEM employers in Scotland with at least one skills shortage vacancy was 6.4 per cent’.

We are a country with a proud heritage of scientific thought. But this SNP government is dimming the lights in a country once known for its enlightenment.