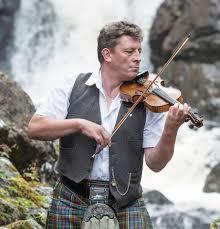 The Banchory Coat of Arms composed and performed by Paul Anderson – YouTube,

The Inter-clan Croquet Competition and the Estate presence at the Banchory Show. 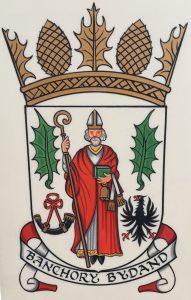 Readers of the Banner will have seen the presentation of a new Coat of Arms to Banchory.

It can be seen and heard on youtube and is very much worthwhile listening to it.

We had our tent at the Aboyne Games and a large number of visitors. We were pleased to entertain large contingent from Clan Baird. Amongst their guests was the US Principal Officer to Scotland,

Ellen Wong, and we were honoured by her presence 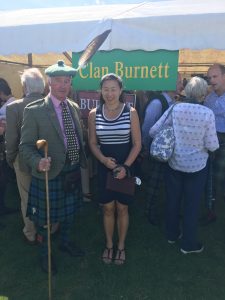 Ellen Wong is pictured here with Richard Holman-Baird, Chieftain of Clan Baird. Richard recently presided at the Glasgow Games in Kentucky where I was honoured to be present last year.

Since the Games, Richard has been elected Commander of Clan Baird subject to ratification by the Lord Lyon King of Arms. 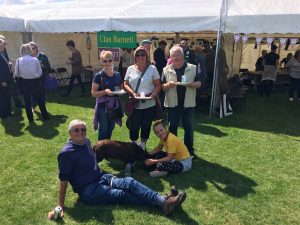 Several Burnetts visited the tent, but for some reason we only managed to get a photograph of a few. Bill and Lynne Burnett from England with their grand-daughter Molly, were here again staying with near Crathes neighbours, Harry and Anne Paton 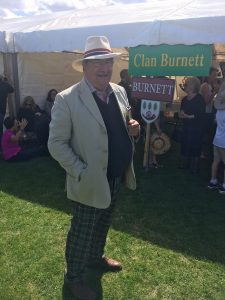 Robert Bogden, whose brother, Nick, gave us the first Gathering talk on Crannogs in 1992, has offered to guide us around Drum in 2021. Robert is a product of the Irvines of Drum and Burnetts of Kemnay 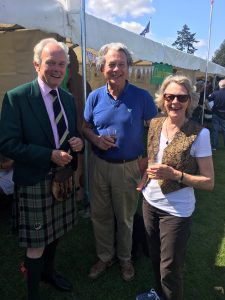 Lachy Rhodes, historian and castle restorer, is joined by Hugh and Jane Arbuthnott. The Arbuthnotts have strong historical Burnett connections and are close neighbours in Spain where, with other family members,  they are famed world-wide for their luxurious walking safaris. 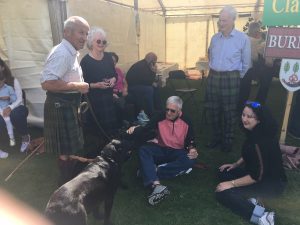 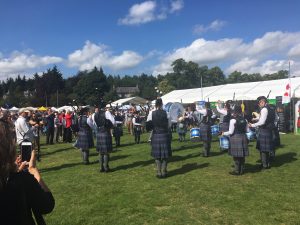 Whereas we were privately entertained in the Clan Village in 2017 by the Banchory and District Pipe Band, this year it was the turn of Deeside Caledonia Band. 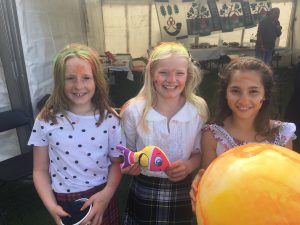 How the young spend their our money at the games. Hester Burnett on the left. 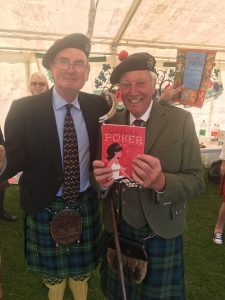 We were honoured again by the Chief of the Games , Granville, Marquis of Huntly and James Ingleby, Lord Lieutenant of Aberdeenshire. They volunteered to ’promote’ two of our Burnett  books. Granville with Eliza’s Girls Guide to Poker and James with the advance copy of People and Painting – see elsewhere in this Banner. One might question their marketing skills! 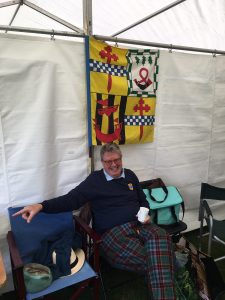 President of the Stewart Society had a tent at the games but readers will see that he has not overlooked his Burnett connection.

The annual Inter-Clan Croquet match was held on the lawn at Crathes on August 1st. New entries included two teams from Clan Baird who were ably supported by a number of clan members and representatives of Athens, Alabama with which Stonehaven is twinned. The supporters included Dr Debra Baird, President of Clan Baird Society Worldwide, Inc who kindly forwarded to me the group photograph. Baird players included Richard and Angus Holman Baird, Branton Baird and Ronnie Marks, Mayor of Athens.

The House of Gordon fielded two teams and were victorious with their “A” team consisting of Andrew Gordon and his daughter, Rosie who beat the Burnetts “B” team in the final. Robert Bogdan and John Bond represented Clan Irvine,  Roddy and Fiona Strachan Clan Strachan and Lucy and William Gordon playing for House of Gordon “B”.

We were very grateful to Bill Strachan, Captain of the Aberdeen and Crathes Croquet Club and Nick Marshall for organising the event which we hope to stage again next year as we have an increasing demand for participation.

Below some shots of the evening 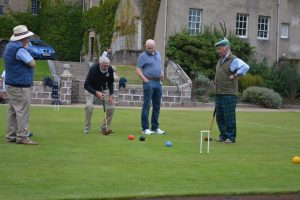 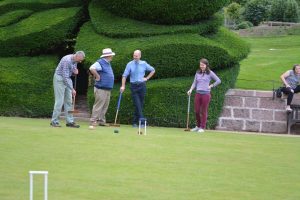 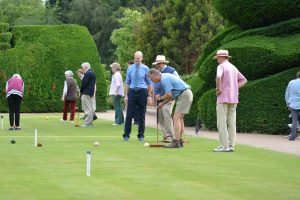 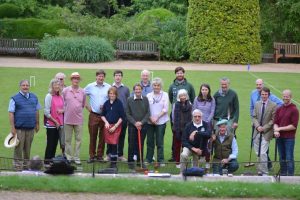 For the first time, Leys Estate had a tent at the annual Banchory show which is held on the last Saturday in July. We were awarded the prize for the best tent which was admirably staffed by our team including Steven Moir, PGA Director of Golf at Inchmarlo, Susanne Shepherd, Marketing and Communications Manager, Carol Gordon, accounts, Taylor Hill, PA to Alexander, David Smart, Chief Executive, and Michael Bott, Estate Dept. 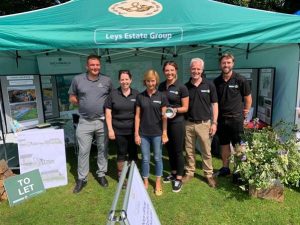