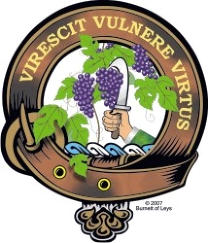 I was recently asked this question. Simplest questions can be the hardest to answer.

The simple answer to your question is no. Various pieces of research have shown that the Burnett surname in Britain is most likely to have evolved from persons of the surname Barnard(e) who came to England from France in 1066 and whose names appear in the Doomsday Book recording them as holding various estates in southern England. Descendants were later granted lands in southern Scotland from the King and it is from them that the Burnetts of Leys originate.

However, whereas all Burnetts do not originate from Scotland, it could be argued that they are from the same source and consequently have some consanguinity. I would therefore read it that we are all the same family, but not all Scots.

For further detail of this question, reference might be made to Eileen Bailey’s chapter in Crannog to Castle and from which I draw the following.

A question is the origin of the surname Burnet(t) and to what extent it is a variation of, or independent to, that of Burnard(e). Relevant is whether the surname in either form was introduced to Britain having roots in Norman French or Anglo-Saxon stock.

The use of surnames is generally regarded as having evolved around the late eleventh century when, with increased population and mobility, there began to be a need to have some method of more clearly identifying one individual from another. In terms of the history of England, this was after the Battle of Hastings in 1066 and the conquest by the Normans. Many of those who crossed the English Channel to fight for William the Conqueror at Hastings were from northern France and brought to England a number of family names from which some modern surnames are derived.

Did the surname Burnet(t) evolve from Burnard(e), Barnard(e) and Bernard(e) or was it an individual surname in its own right? There are those whosuggest that Burnet with the later addition of an additional ‘t’ had its origin in the OFr. burnette, a diminutive of the French brun meaning dark brown.

The term burnete was later used for a dark-brown woollen cloth. If this were the case we would have a stronger argument for promoting a French root forthe present day bearers of the surname.

We would also expect to see the surname Burnet used, albeit with the customary variation in spelling, throughout early documents. Instead what we find is not only a variety of spellings of Burnet and of Burnard/Bernard but also recorded instances of them being interchangeable in records of the same persons or within a family. This can be seen in the genealogy of the Burnets in southern Scotland, later in that of Leys and in local records.

George Burnett, in describing the Southern ancestors of the Burnetts of Leys, states that ” there is proof, amounting to moral certainty, that the Saxon family of Burnard which flourished in England before the Conquest were the progenitors of the first Alexander Burnard who settled on Deeside “. It had so far been generally accepted that the progenitor of the Burnet(t) surname was a Saxon family of Burnard. Beornheard was a Germanic personal name which, translated, means “bear-hard”.

The extent to which genealogy should or could be based on moral certainty would be strongly argued against by those who contend that, unless it can be authenticated, it cannot be considered to be fact. Curiously, Burnett does not elaborate on the pre-Conquest Saxon Burnards. There are alternative schools of thought, one of which suggests that evidence, which George Burnett appears to have either not considered or perhaps omitted, indicates that the ancestors of the Burnards/Burnetts were most likely not Saxon but Norman in origin. There is much evidence to suggest that this was correct

There is documented proof of the existence of Burnards and/or Bernards in England from 1066 as they are included in the aforementioned Doomsday Book, the Chartulary of St. Neot’s and, as we have seen, in the Charters relating to the Abbey of Waltham. The charters of the religious establishments show records of land gifted to them, owned by them and leased or sold by them. It is through these records that the genealogy of the Burnards has been traced from the Norman Conquest through to the 13th century but, irrespective of George Burnett’s statement, there is no apparent trace of them prior to the arrival of William the Conqueror.