The Largest Line of Burnett’s in the United States

By Terry Burnett-Barwin, Administrator of the Burnett Project

Last year, I wrote an article for The Banner explaining Y-DNA testing and its benefits. In case you missed that, in short, Y-DNA testing analyzes the DNA markers of a man’s Y-Chromosome.  This is not the test most people take offered by ancestry.com and 23 and Me.  It is offered only by Family Tree DNA (ftdna.com).  Y-DNA testing has proven that Jeremiah Burnett, whose line may account for >10% of the Burnett’s in the US today, was not the son of John Burnett and Amy Gatewood as previously believed. 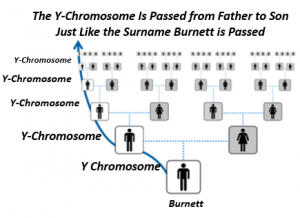 The Y chromosome is passed only from a father to his son. Unlike other types of inherited DNA, the Y chromosome does not change much from one generation to the next, making it very useful for identifying a man’s paternal-line ancestors.  Because of this stability, unlike most DNA tests, the Y-DNA test can accurately prove paternal lineage over 1,000 years back in time.  Burnett’s who have taken the Y-DNA test have also joined the Burnett Y-Chromosome project where members collaborate on their Burnett heritage.   Only men have the Y chromosome, but many women participate by recruiting a brother, father, uncle or male cousin from their Burnett line to surrogate test for them.  My two brothers tested for me (I am female).  The Burnett Project has led to some very exciting new discoveries about our Burnett heritage.  The example of Jeremiah Burnett is outlined below.

The tireless work of June Baldwin-Bork, author of “The Burnett’s and Their Connections, Vol’s I-III” has been the basis for many early-American Burnett family trees.   Given the poor access to historical records and the lack of DNA testing in the 1970’s and 1980’s, when her work was done, it is surprisingly accurate.  Bork sometimes had to guess at parentage, using naming patterns and other clues.  As our Y-DNA testing results show, her guesses were often right, but new Y-DNA evidence is bringing to light some guesses that were incorrect.

The Burnett Project is divided into sub-groups of men whose Y chromosomes match, indicating they share a common male Burnett ancestor. The largest sub-group in the project are the descendants of the well-known Jeremiah Burnett (hereinafter “Jeremiah I”), said to have been born about 1718.  June Bork, author of “The Burnett’s and Their Connections,” suggested that Jeremiah was the son of John Burnett II and Amy Gatewood.  John II died in 1718 and left a Will naming two sons, John III and Joseph.  John II did not name a son Jeremiah in his Will.  Bork theorized that Jeremiah was not named because Jeremiah was born posthumously – that Amy was pregnant with Jeremiah at the time of John’s death.  It is now proven by Y-DNA testing that Jeremiah I was not the son of John Burnett II and Amy Gatewood.

Y-DNA results have revealed that Jeremiah I’s line is a previously undiscovered line of Burnett’s and is the largest of all the Colonial American Burnett families. Test results show that Jeremiah I was related to Alexander Burnett born about 1720 who lived in Bute County (later Warren and Franklin Counties) North Carolina. Jeremiah I and Alexander were probably brothers and it is believed that there were more brothers, including David Burnett born about 1725, who also lived in Franklin County, North Carolina.  Thomas Burnett b. 1750 who married Mary Quarles is also believed to have been a member of this family, but we do not yet have a descendant tester to prove Thomas or David.

The descendants of Jeremiah I and Alexander Burnett make up the largest sub-group of the Burnett project. This sub-group the descendants of all the Burnett’s living in Edgefield County, South Carolina between 1770 and 1820, all those living in Patrick County Virginia during the same period, and those living in Franklin and Warren County North Carolina from 1750 to 1830.  Many of the next generation migrated into Texas, Alabama, Georgia, and other parts West.  Through testing, we know that a different Jeremiah Burnett (born about 1750) who married Lurana Gentry, and Pleasant Burnett who married Anna Gentry also descend from this line of Burnett’s.

As more men take this unique and valuable test, we will continue to learn more about these and other Burnett families. At this point, most project members are American, but recent developments suggest that more Europeans are testing in greater numbers.  This very exciting development will extend what we’ve learned about the Colonial American Burnett’s back to their homelands, enabling us to link our lines even further back in time.

The descendants of John Burnett I and II and the descendants of Jeremiah I and Alexander Burnett, highlighted here, are just two of ten distinct Burnett families that have tested. We have used the test results to build a Master Burnett Family tree on ancestry.com.  This tree is sourced only by proven historical records and Y-DNA results.  Our goal is to create a Burnett tree that is proven both scientifically and through historical records and that can be used to correct the wide-ranging misinformation contained in many family trees.  If you are interested in testing and joining our project to learn more about your Burnett heritage, please contact me at terrybarwin@gmail.com. We hope you will join us!