Getting to know our Officers and Board

Leland L. Burnett assumed the duties as Secretary of the House of Burnett in September of 2005. His Great Grandfather, Dr. James K. Burnett came from VA through the Cumberland Gap to KY, in the 1860’s. Leland the son of James Henry Karr Burnett was born in 1940 in Lincoln Co. KY.  In the early 1960’s he went into the US Navy where he remained for 30 years, retiring in 1991. He and his wife Nancy moved to Door Co. WI to property they had purchased years earlier.

He served on the Door Co. Veterans Service Council for 6 years and did some lobbying for Veterans issues in Washington DC.

Leland has 5 children, 9 granddaughters, 5 grandsons and 16 great grand children. His wife Nancy lost her 7 year battle with cancer in Jan. 2007.

After his retirement in 1991 he started a serious search into the Burnett side of his family. He traveled throughout Kentucky, Virginia and Tennessee, visiting libraries, historical societies, county and state record facilities and searching newspaper records. Making a stop at any reunion or gathering he came upon. Thru this search he was able to trace his lineage back to 1323. Leland is known in some of the Burnett circles as the Burnett story teller.

Leland’s intent is to continue to serve the House of Burnett in some capacity. As long as his health holds and he has the energy he will be out and about telling the Burnett story. 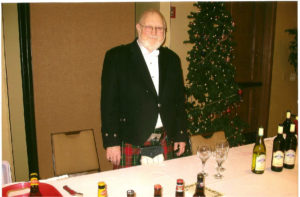