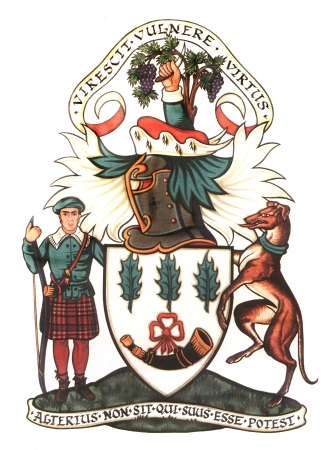 The History of the Crathes Gardens

The Gardens and Landscape of Crathes Castle: a four hundred year story

The book has been researched over eight years. It will be in two parts:

The book is to be extensively illustrated with historical images and modern photographs that show the design of the garden and its diversity of plants. It is hoped that it will be published in 2019.

Susan came to see me recently to update me on this wonderful project. She told me that she could not find a portrait of my great-grandfather,  Sir Thomas Burnett of Leys. The reason for his was because it was burned in the 1966 fire at the Castle. However, Sir Thomas was married to Mary Cumine of Rattray. Rattray is an estate about thirty miles north of Aberdeen and is owned by James Comyn, who was also my godson.

The artist of the lost painting painted a smaller version which is at Rattray. James’s grandfather, Philip Cumyn (Cumyns have a habit of changing the spelling of their names), had the Rattray picture copied by a noted artist, Anna Zinkeisen, and gave it to us as a wedding present. Consequently it is at House of Crathes and not in the Castle 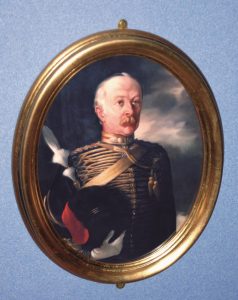 In 1935, Anna and Doris were commissioned by the shipbuilders John Brown and Company to paint murals on the ocean liner RMS Queen Mary. Their work can still be seen, in the Verandah Grill room, on the ship which is now permanently moored in Long Beach, California.

Coincidentally,  Philip Cumyn’s son, Peter, and his wife Madeleine, who live in Canada, make an annual visit to Scotland and we always meet up for lunch which this year was the day preceding my discussion with Susan Bennett.

Susan Bennett was also interested to read through some of the many old diaries in case there was something of interest for her book. She came across an entry regarding the ice houses about which I have written in previous Banners

While the tastes in and availability of food stuffs dramatically altered over time, game, beef, mutton and fish would have remained central to the diet of the castle’s inhabitants.  Food was kept reasonably fresh in Ice Houses of which two remain close to the Castle. 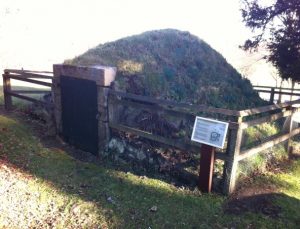 The functional use of the pond ceased in the mid-19th century and it was used as a recreational site for the inhabitants of the castle. A complete ice manufacturing system – the upper dam, sluice, lade, pond, slide, lower dam and ice-houses – is present at Crathes Estate and the survival of this system in such an intact condition appears to be rare as ice was more usually gathered from a natural pond.

The above is reported in the Historical Survey, but there is no indication of the dates of construction of the ice houses or the manufacturing system, although they went out of use in the late 19th century when large clean blocks of ice were imported from North America and Norway. Below are two maps in the Crathes archive which may provide some assistance in understanding the history.

The Estate map of 1838 shows an ice house in the field several hundred yards below the Castle. There is no ice house on the green between the Stables and the “Offices” as described on this map. A hundred yards or so to the north of the “Offices” behind the Castle, there is a small burn which crosses the north drive.  My conclusion is that the ice house in the field to the south was created where conditions favoured its construction and because it would have been conveniently located near the principal drive to the Castle. The line of this was directly south towards the Balbridie ford where the River Dee was crossed. 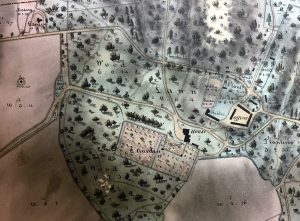 The 1867 map shows the different picture. From the Burn to the north of the Castle, there has been created the ice manufacturing system. There is also an ice house on the green between what were the “Offices” and the Stables. (small square mark immediately below the number 1601).

The map also shows that the 1838 ice house has been removed. By this time, the southern access no longer existed and been replaced by the East Drive. This must have been largely due to the arrival of the Railway Line in 1853 with the Crathes Station and the construction of the Durris road bridge in 1862 to replace the ford.  The location of the new ice house a short distance from the new ice making system was clearly more convenient. It seems reasonable to assume that the ice system had only just been created at that time. 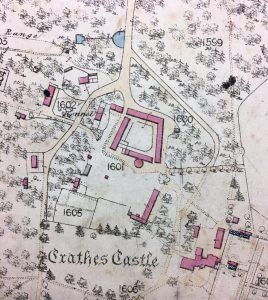 There is an ice house close to the current car park and which is not marked on the 1867 map. This was presumably for the Castle use, but was built later.

Susan sent me a report from one the diaries of Sir Thomas Burnett, the 8th Baronet and which give added information about the running of the estate. Like his father, Thomas was a keen sportsman, but his diaries of the 1830s record more information on the farming aspect of the estate. The ploughing, the sowing of oats, potatoes and turnips are all recorded and details of the cattle sold noted. In April and May 1831 hundreds of trout are killed for storage in the ice house. The ice is collected from the specially constructed ice pond when the frost is hard: 28 December 1833 ‘Ice house filled. 111 cartloads put in yesterday and today’. There is never any mention of the garden in the Thomas’s diaries, but a reference to peacocks adds a bit of glamour to the general scene: 13 June 1831 ‘Pea fowls out’; 23 June 1834 ‘3 broods of Pea fowls out last week’.

Arguably but tenuously relevant to the above is another detail. There is another very small building on the 1837 map and to the west of the ice house and just north of the rectangular grey coloured building.  This must be the Doocot, which was constructed in 1866 and which is shown in the photograph below. It was moved to the Garden in 1938. At one time there was also a pigeon yard with another doocot, an invariable adjunct to a country house, and this was adjacent to the Castle on the South West. Maybe this accounted for the irregular footprint of the tower in 1837 and it was replaced in 1866 as this feature is not shown on the 1867 map. 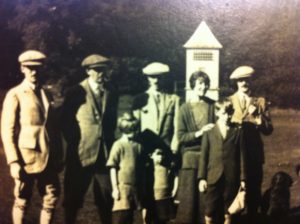 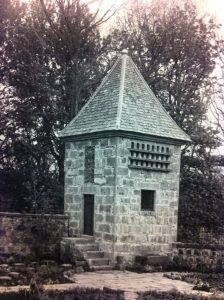 Historically, there has been a Burnett pew in the Scottish Episcopal church, St Ternan’s, in Banchory. I don’t usually sit there because it means that I have to be there very early before somebody else does. There is a prayer book box in the pew and which has been locked for many decades. I opened it last week to find, amongst others dated 1904, the prayer book of Baron Bentinck, the last Burnett related owner of Banchory Lodge which is now a hotel. I remember his presence in the Church some 70 years ago. The complex family genealogy and ownership of that estate can be found in The Holly and The Horn. The book is now fittingly in the archive.  The kneeler lying on the seat was embroidered by my wife, Fiona, in 1971. 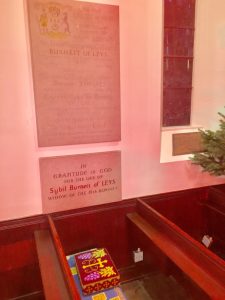 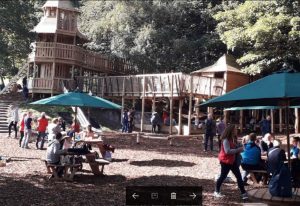 Crathes visitors who have energetic children to keep occupied, or who enjoy such activities themselves, will be pleased to learn of the wonderful new adventure play area that has been constructed beside the car park and Go Ape course. 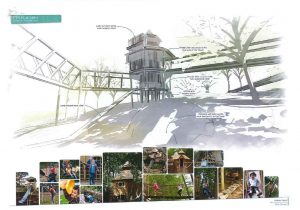